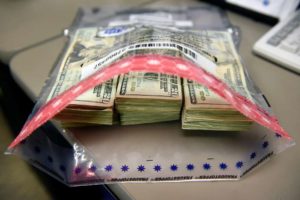 California’s fast-rising cannabis industry, which has been forced by federal law to conduct almost all its business in cash, got a boost Thursday when legislation was introduced to allow banks to open accounts for people involved in the field.

The proposed law, known as SB930, is an attempt to deal with U.S. Drug Enforcement Administration rules that still classify cannabis as a Schedule I drug, and therefore put banks opening accounts for marijuana businesses in a precarious position.